Once upon a time, a long time ago, a very generous toy maker and his wife lived in a very cold and distant country. Once a year, they gave gifts to good children. But as the number of children increased every year, there came a time when they had to make a decision: they needed help. Thus were born the first Christmas elves.

Christmas Tales, is intended to be a role-playing game, in the form of a story, simple for young children (4 years and over) accompanied by a parent (as a storyteller). He encourages teamwork and sharing. The players embody the elves of Santa Claus. Using their skill, resourcefulness and curiosity, they will overcome trials and encounters with their three qualities.

A simple system of dices with color (see chromadice) is used to pass their test. So no need for mathematical notion.

Available only in french (for now).

French PDF can be purchase on Itch.io.

Characters sheets are available freely on Itch.io and DriveThruRPG. 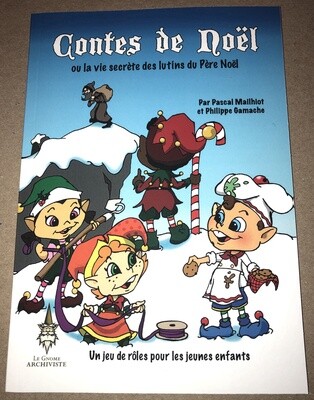